How To Convert An Android App To IOS And Viceversa?

When you consider expanding your business through digitization, the more the merrier approach is deemed to be the best bet. You get immense benefit if you have your mobile app present in the App Store and Playstore both. If you are thinking of converting an android app to iOS or vice versa, then you are stepping up into the journey of accelerating your business.

It obviously ain’t sufficient to have a mobile app in only either iOS or Android.

Popular photo and video sharing app Instagram which is eye candy of the bazillion users today was initially launched in only the iOS platform with the rudimentary features. As the user base grew and the number of downloads increased in the app store, the creator decided to make an android app as well. And reportedly it turned out to be a smart choice for the creator as the number of Android users worldwide resulted in massive app downloads.

Why You Should Convert Android app to iOS app & Vice Versa?

If an example of Instagram is not enough, then here are a few other reasons that will compel you to think about why you need to convert your existing app to another platform.

By converting your Android app to iOS or vice versa, you will have the opportunity to acquire one-third or two-thirds of the world’s mobile users and extend to new regions and countries.

In regions like Asia, Central, and Eastern Europe, Africa or South America, most of the populace makes use of Android devices, thus porting the iOS apps to Android can give new audiences from such regions.

If you opt for porting an Android app to iOS you will get new users from Western Europe and North America region, where iOS devices are being used considerably.

Having two apps means two sources of revenue. Generally, Android apps have more downloads and can get you more revenue from the in-app ads. Whereas the iOS audience is likely to spend more on apps, thus you can look ahead for higher rates of in-app purchases.

With two apps, you will have certain advantages like two marketing tools to promote your app startup, two means of reaching for your audience, and two ways of earning. In order to survive in an epic app battle and compete with the market leaders, you must have to determine to port your app to another platform.

Building an app from scratch for another platform will cost you a considerable amount. Whereas converting an Android app to iOS or contrariwise saves lots of money and time.

What to Keep in Mind Before converting an Android app to iOS?

One of the main problems developers face while converting an Android app to the iOS app is both platforms’ different screen sizes. Android devices till now have a total of 20 different sizes whereas, iOS has only 4 to 5 sizes. So while porting an Android app to iOS, developers won’t have to go through too much of hassle due to less number of screen sizes.

It doesn’t mean that while converting from iOS to Android, developers have to convert for each screen size. Due to android’s various screen resolutions, it is possible to convert only 5 to 7 screen sizes which will be automatically adjusted by the system on other sites. 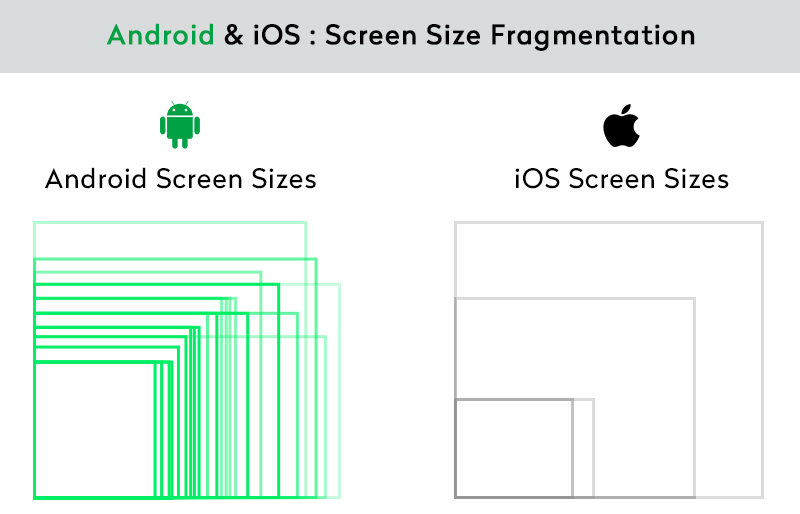 Operating system fragmentation is also one of the vital factors that should be considered while converting your app to the iOS app or other way around.

Android and iOS both undergo periodic OS updates to provide their users with a new experience. So, any new apps that come to the App Store or Play store should support the existing OS and other versions of OS.

Since, the major portion of iOS’s OS versions are divided among 12.x, 11.x, and 10.x, iOS developers can easily port an android app to these three versions. However, sadly, the reverse is not true. There are multiple devices and manufacturers out there in the market that provide Android powered Smartphones. And these smartphones are run on various operating system versions. In other words, the device and OS fragmentation is always a problem for the android platform.

Therefore, while converting the iOS app to the Android app, you have to make sure you convert it for make it compatible with the majority of the Android OS versions.

Now, this is another vital factor that should be kept in mind while transforming the Android app to the iOS app. You might have in the past experienced this strange feeling while operating or using a phone with different Platforms. Especially navigation panels and buttons. The back button you might have used in Android phones is placed on totally opposite corners in the iPhones.

Not only this but, icons like a battery, message, camera, phonebook, and more look different in both platforms. So, undoubtedly interface designs affect the migration process. Android utilizes mostly vertical elements whereas iOS uses both horizontal and vertical elements.

When a developer converts an android app to the iOS app, he or she has to consider the UI and widgets for the screens. Because sometimes, not all the Android widgets are available in the iOS library i.e Multiple section dialogues box. So, developers have to change the UI accordingly for the best user experience.

There is a misconception that transferring from Android to IOS requires only transferring the code from one platform to another. But that is not true. Both platforms work on a different coding language. And these languages have their own semantics and structure which has to be followed properly.

Android applications are coded in Java & Kotlin whereas, iOS apps are written in Swift and objective-C. The majority of today’s iOS apps are coded in Swift. Even if any feature works the same on both platforms, the code written for both platforms is different. Only logic remains the same. Therefore remember, when you give your app to be converted into an iOS app or other way around, it takes time.

The process begins with analyzing your existing application to figure out the process flow. The development team will understand the functionalities, the working process, the flow and behavior of the mobile app.

Ahead of converting a particular mobile app to another platform, we ensure that the mobile app is bug-free and propose the best solutions for the app first. Even after the complete porting, we perform several testing methods on the app to make it absolutely flawless.

To ensure that the conversion process is carried out effectively, our full-stack developers understand the UI components, frameworks, code structure, and the architecture of the app.

We understand the backend (framework and architecture) of the mobile app for a faster and smoother porting process before starting the porting process.

How to Convert the iOS app to Android & Conteriwise?

The first step of converting an iOS app to Android and vice versa is to create the architecture of the new app, For the sake of better clarity of functionality, design, and flow of the app.

The second step is to create a new design by keeping the existing app and its design guidelines into consideration.

This step includes the final porting with adaptation and verification to existing mobile apps for the features, functionality, and flow of the new app.

Now that the porting is completed; the app will be tested as per the guidelines of beta testing, integration testing, and validation testing.

The app is finally ready to publish live on the Play Store or App store for your targeted audience.

It’s always a feasible decision to convert an android app to iOS app & vice versa rather than making a separate app from scratch. Now you have enough knowledge of how exactly mobile app porting is done and the reasons to do that.

It’s time to port your existing app to another platform and flourish your app startup by acquiring a new audience. For any query, you can contact us and get the right app porting solution.

FAQs On Porting an App to Another Platform

How Many Developers Are Required for Converting an App?

If you have hired 1 developer/Freelancer or one designer for the task, then it will suffice. But then the time can exceed up to 6 months, as a single mobile app developer will have to port the design, features, and functionalities. On the other hand, if you work with an expert app development company, you will get a dedicated development team; as a result, the process of porting will not take much time.

What Is the Best Way to Convert an App to the iOS App or Reverse?

Well, there is no such way. The only way you can port your app to IOS is to go for native app development. Yes, you can take some design part from the existing app but you have got to code from scratch.

Is It Easy to Transform an Android Mobile App to the iOS Mobile App?

No, it is not simple to port your existing app to another platform. It is as hard as building a new app. From the beginning of the project, you have to think about all the aspects of new platforms and then start the whole process.

How Much Does It Cost to Convert Android to iOS or Vice Versa?

Again, it depends on a multitude of factors. But in most cases, converting an app is just like developing an app from scratch, just on a new platform. The cost of porting an iOS app to Android and vice-versa will be between around $6000 to $1,00,000.

However, as I told you earlier, it depends on several factors like features, functionalities, design (UI/UX), frameworks, platform, complexity, and most importantly the location of the development firm.

How Long Will It Take to Port the Android App to iOS?

The time required in porting an app depends on the number of developers working on the project and the quality of their work.

If you have hired a freelancer and you are asking for changes again and again then it will take a lot of time, if you have hired an experienced Mobile app development company then you get your app ready in considerably less time.