A Brief Comparison for your Convenience in Choice of App Building

This globe has been under constant revolution. Urbanization has also caused an increase in the rate of internet users. As of July 2021, nearly 5 billion people use the Internet. There has been a consistent rise of 257 million new Internet users since the COVID-19 pandemic struck us.

This is apparently the perfect time to launch a new business model which also has an independent digital presence.

Gaining a competitive edge over your business rivals requires a lot of effort. One of the most important aspects to expand your reach and revenue is launching a mobile app. Every business can have an app, be it e-commerce, lifestyle or gaming. The apps are majorly coded and executed in these frameworks of native or hybrid.

Ever since businesses have realized the scope of growth after launching an online application, there has been an increase in the market competition.

After the BlackBerry & Windows system downfall in the mobile phone sector, the only two operating systems to focus on are Android and iOS. There is a constant mental turmoil as to which platforms have to be considered for creating the app. Let’s dive deeper into both the fronts and then compare those on different bases.

Apps have outspaced websites today. The reasons behind the same are notifications, speedy access on the phone, more features and personalization options.

Major platforms for building apps are:

Let’s read about both Native and Hybrid apps in detail and compare them on different bases.

A native approach is used to create an application for mobile in native platform app. The coding languages and framework make the app compatible with only one type of platform, either iOS or Android. If the app has to be made available to the users of both operating systems, then two separate codes from scratch have to be developed.

An app created for iOS cannot be launched for Android device users. A different version meant for Android can be used by an Android user. The native app is coded separately for every platform it has to be launched on.

An app that is compatible with various operating systems is a hybrid app. There is no need to develop different codes for each OS. The performance of these apps is exceptional. Another name for hybrid apps is cross-platform apps. This is also quick to build and launch, hence comparatively it costs less. The code created for one platform can be reused and edited to make the other platform code.

Let’s read briefly about tools and frameworks used in app development on any platform.

Which Platform to Choose to Build your App? – Native app vs Hybrid App Development

There are some factors that affect the platform chosen to build hybrid apps and native apps. 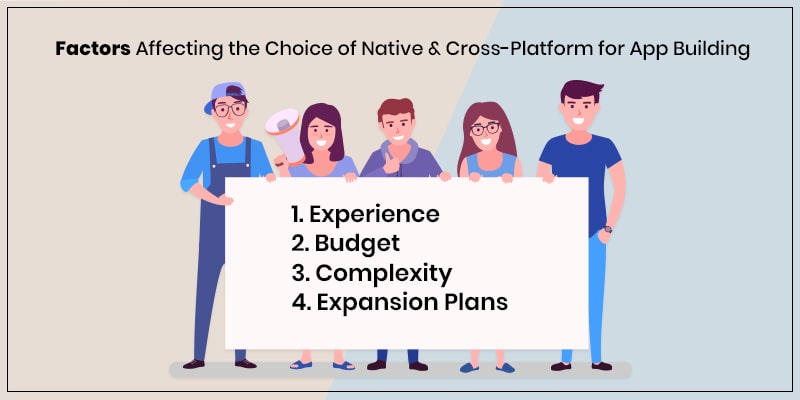 Read more about these deciding factors below:

In any industry, a company can be in either of two scenarios:

If you are relatively new in the market, you must go for a hybrid platform app and later switch to native platform.

With modernization have come the high expenses that we all have been paying. Every business has a budget that they create for themselves. It includes expenses on fixed and variable assets, capital, estimated revenue and profits, etc. They also need to set up the cost of developing a mobile app. With less budget for this task, one can go for hybrid platform apps. But, with more budget available for app development, one can go for native platform applications. Budget of an organization makes them choose one of native app vs hybrid app.

The purpose of the app matters a lot. If it is to simply fetch and display the information on the screen, a hybrid platform app would be the way to go. But, if the app requires heavy processing, then native app is the way to go.

In the beginning, a hybrid platform is a good idea as it is less time-consuming and low costs. If there are future plans of expansion, then it is always a good idea to switch to native app development as also the budget would have increased by then.

You May Also Like
How To Build A Hybrid Mobile App?
Why Flutter Is the Ultimate Choice for Cross Platform Development?

There are so many points that make the native and hybrid apps different from each other. Here is a simplified table for you to show how apps made in native stand separate from hybrid apps:

This platform provides complete control to the programmer to access the native platform app. All tools, Application Programming Interface (API), etc. can be used and changed by the coder.
Increased Store Support

Since native app’s code is built separately for both the platforms, it is fast and performs better. Also, due to these reasons it ranks higher in the respective store.

Apps built in the native platform are very flexible. The codes can be edited with an available array of tools and good resource management.

Native apps provide a good and comforting user experience. The users of such an app will like using the app as it is highly functional.

If the target audience is from both Android and iOS platforms, then two apps will have to be built separately. This requires double the energy, time, money, resources and two teams of experts in the respective operating systems.

It is difficult to keep upgrading the app’s code for both platforms from time to time. Searching for bugs, fixing them and maintaining the apps on both Android and iOS can be time consuming and involve a lot of effort. 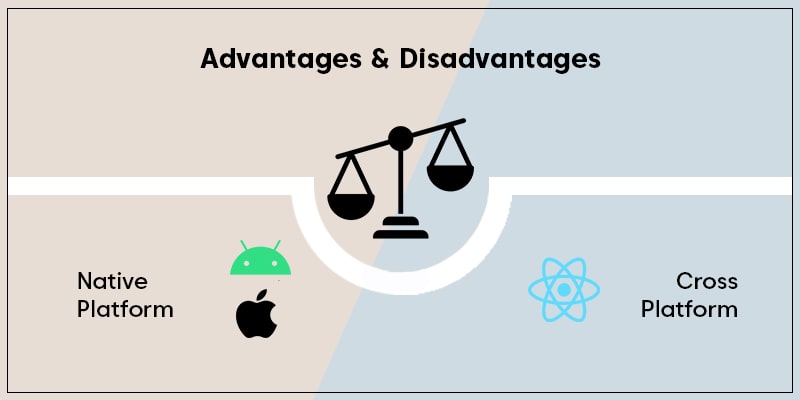 Single developer or developing team has to work on the app for both Android and iOS and that is compatible with all devices. Also, the app is light-weight and easy to understand for users.

A startup or a relatively new enterprise that cannot afford spending a lot already can benefit from choosing a hybrid app.

Since a single code script works for both operating systems, time taken in developing the code is less.

One Primary Code Base

Only one code base is created for a hybrid app since it runs only on one code script.

Since these apps are multi-platform, they have a wider audience to cater to. They reach more users and naturally get more downloads.

Certain native development skills are required to add advanced functionality to the app.

This platform’s user interface and user experience are way too simple and less attractive. At times, a less attractive UI can drive the user away to another competitor app.

The additional abstraction layer and rendering makes the app slower in performance. 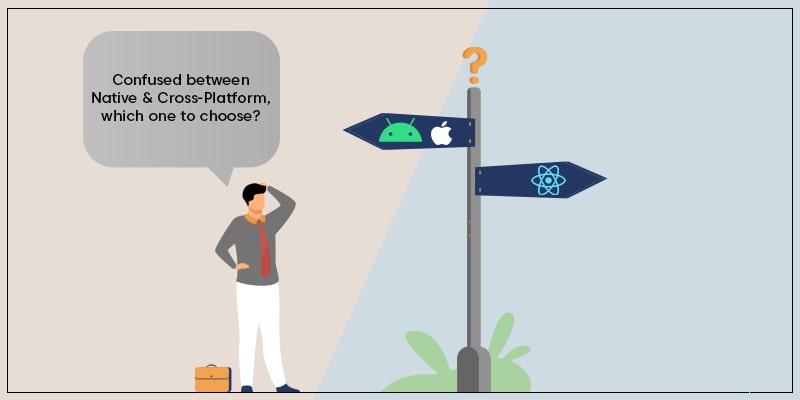 Somebody who is a fresher in this field or belongs to a non-technical background, it definitely can be a confusing choice. In the absence of a CTO, use the following as a checklist and decide which platform would be the most suitable for your app.

Choose Native App if you:

Choose Hybrid App if you:

The battle between hybrid app development and native is endless. But, to sum this blog up, we all have understood that every platform has its own perks and perils. Mobile development has come a long way in this 21st century. The important aspects to consider while choosing the platform are all in the client’s hand.

There is no winner or loser between the Native app vs Hybrid app battle, Whichever platform serves the need criteria of your organization, you should choose that. If you need help in deciding the same, professionals at Excellent Webworld provide a FREE consultation. We have a broad base of 900+ clients in more than 7 countries. Get help from a team of experts with an experience of over 10 years. We have a team of experts for iOS Native, Android Native and Hybrid (Cross-Platform) app development.

Q1. What are the best hybrid mobile apps?

It depends on the budget and scale of the business that a client chooses to go ahead with native or hybrid app platform. Famous and daily-used apps like Instagram, Uber, Gmail, etc. are the top examples of hybrid apps. For higher performance and quick development procedure, hybrid apps have a plus over the native platform apps.

Q2. Which language is better for hybrid mobile app development?

Hybrid mobile app development involves creation of a single software that is compatible to run on both Android and iOS platforms. JavaScript and Kotlin are widely used to code hybrid apps. Also, this ensures the best end results. User experience is also great in hybrid apps. These are easy to learn.

Cost of development has always been an important factor in deciding the better of the two – native app vs hybrid app. Well, here’s a universal formula to calculate the final cost of app development – Total Development Time * Hourly Rate = Total Cost. An app developer charges according to experience and expertise. Excellent Webworld developer charges per hour start from $20 for Android and $22 for iOS. Hybrid developers charge from about $25 per hour.

Q4. What is the difference between React Native and Hybrid Apps? 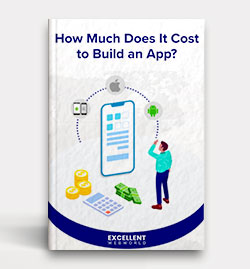 A complete understanding of the factors that are affected while developing an app. 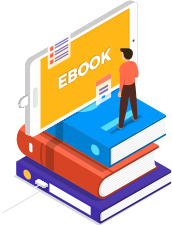 Cost of developing a mobile app
A comprehensive guide on the cost of mobile app development. Whether you want to build a hybrid app or native app, this guide will help you know the exact cost.
Download
Related Blogs
Home » Dev & Design » Native App vs Hybrid App Development – 2022 Latest Guide