How To Integrate Siri Into Third-Party Apps In 2022?

We all know that Siri was the dream child of Mr Steve Jobs. The voice recognition assistant was the first-ever model, and a great experiment of Artificial Intelligence implemented in the iPhone. Enhancing the iPhone standards it has taken the convenience concept to the extreme level.

So, voice control has become part of our life. Apple expanded Siri’s capability when iOS 10 was launched. Earlier the Siri app integration was limited to certain apps categories like ride booking, messaging, photo search, payments, VoIP calling, and fitness, however with iOS 13 being launched the list is ever extending. Now, you can even integrate Siri with media apps like Spotify, Pandora, Audible, and so forth.

The best part is with the launch of iOS 14 in September 2020, Apple has assured a major update. The knowledge and avatar of Siri are updated to enhance better assistance and multitasking.

The iOS app developers and app development companies all over the world are grabbing this technology magic and applying it to their business apps. With the integration of Siri into your app, you can provide a bot-style experience to your users. Are you looking forward to launching your own app with Siri integration?

If yes, then this article is for you! Here, we will show you how to integrate Siri with Sirikit in your app. But, let me first brief you on SiriKit.

Sirikit is a framework developed by Apple that lets iOS app developers integrate Siri with their app solutions. Using Sirikit, iPhone app development professionals can expand the functionalities of the personal voice assistive technology by Apple.

Sirikit enables iOS apps and apple watch OS apps to work with Siri, so users can get their work done using just their voice. Your products and services can be used in new ways, finding a new avenue to reach your target users including access from the lock screen and hands-free use.

All this is possible when your app will register an extension with certain intents and possible domains (a group of things Siri knows about). For instance, take a messaging app – it will support a message domain and intent to send a message. Here, Siri will work with the extension to process all the queries of users.

Sirikit defines the types of user request also known as “intents.” For making it clear which intents you may support in your app, the associated intents are grouped into “domains.”

In simple terms, the Intents app extension gets commands or requests from users via Siri and converts them into app actions. So when you ask Siri to book a reservation, Intents changes that request into an app action.

The Intend framework can be used to create Intents app extension which will obtain user requests from Sirikit and transform them into app-specific actions.

Intents UI is used to display user-specific, personalized content in Siri interface after the intents complete user request. It is mainly used to implement app extensions for integrating your app services with Siri. This Intents UI extension can be used to manage the visual interface that Siri provides while performing the tasks for the users.

Since Siri still offers the default user interface, designing this extension is optional. You can use these types of scripts for integrating Siri with your app solutions. Apple has also released the Developers Documentation for Sirikit implementation.

Siri Suggestion is a brilliant initiative from Apple. Due to its analysis behaviour, you can get personalized suggestions of actions and commands to execute instantly. For instance, if you receive an email of a meeting or seminar to attend with the date and time on it, Siri will proactively add it to your calendar.

With Siri Shortcuts you can expose the key capabilities of your apps. This enables people to use the features of apps in new ways. Siri has limited access and permissions to execute commands. This is where Siri Shortcuts come into play.

Siri can help you book an Uber but it may not help you set an alarm in one command. But Siri shortcuts can do that for you. If your app is integrated with Siri shortcuts, then you can create a key phrase that you can say to execute that specific command.

For Instance, you can create a shortcut to set an alarm with a specific ringtone at 6 AM with the phrase “wake me tomorrow”. So when you say, “Hey Siri, Wake me tomorrow”, the alarm is set for the next morning.

This is just the tip of the iceberg called Siri shortcuts. Integration with the latest WatchOS 5 has made it possible for Siri to suggest similar shortcuts to Apple watch making it more quick and accessible on the Watch Face.

How To Integrate Siri With Your App?

So, now we are on the part of the blog which will answer, “how to integrate Siri in ios app Swift?”. However, it is crucial to note that Siri does not support all the app domains yet. This apple virtual assistant works on the following category of apps.

The list is growing each day, so the hope is up for you. Expert and dedicated iOS app developers could make any of these apps with Siri Integration or perform Siri 3rd party app integration and make an app stand distinct in the app market.

Here are the few steps that you need to follow for Siri app integration.

So, now comes the last step of the Siri integration with third party apps i.e testing. Just assume that there is an app named, “ Emotions” and the NSSiriUsageDescription (a Sirikit command) contains “Flowers”.

Now wake up Siri and say, “Send Emotions a message saying text message”. The phone screen will be as given below. 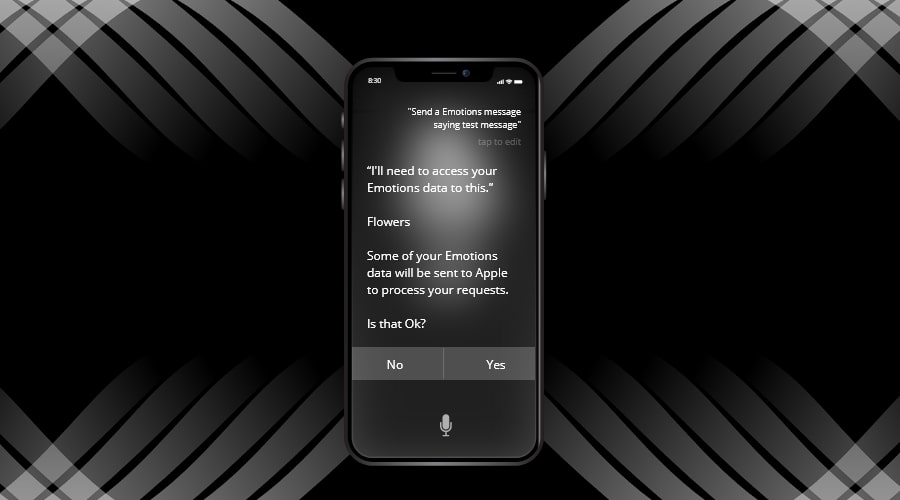 So, now let’s select “Yes” to proceed. The next screen will be as given below. 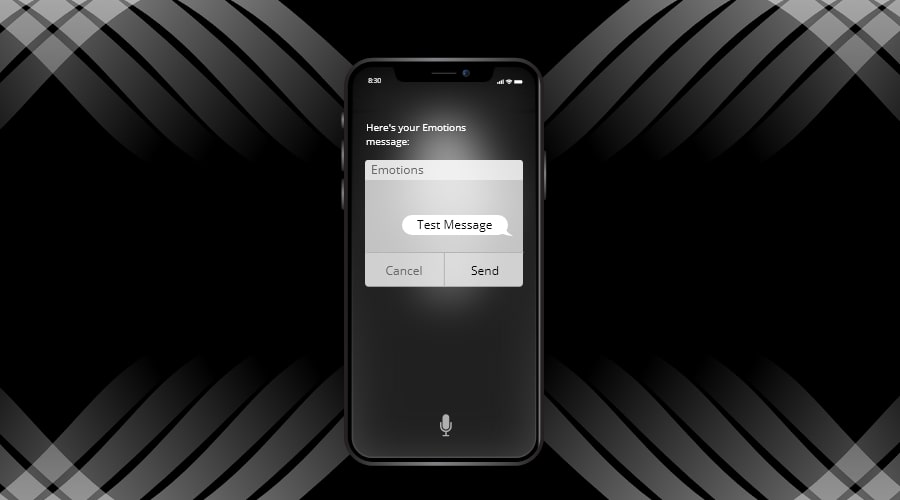 You can even customize this part with your own designs. The point to take note here is that if you try to access this functionality without an internet connection, you will see the screen below. A user will be asked to open the app. 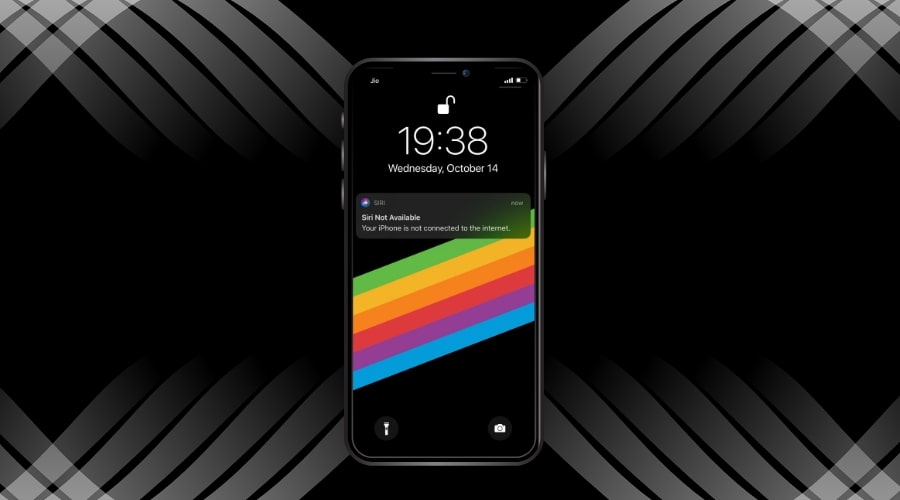 That’s all about testing Siri third party app integration. If you need in-depth information on Siri app integration, get in touch with our iOS experts.

A few apps with Siri third-party app integration are mentioned here based on the business category. Some of the top Siri-supported apps who have already integrated SiriKit are as follows.

WhatsApp: You can send messages to friends by asking Siri: “Hey Siri, send a message to Georgia saying I’ll be there in 15 minutes.”

HomeAway: Make your trip booking easier with the Siri commands on HomeAway. Know about the vacancies and other details of a place with Siri commands.

Airbnb: Know about your check-ins and check-outs for booking with the Siri commands. As Siri, “Hey ‌Siri‌, my Airbnb stay”, and details will be shared to you.

Spotify: It’s just amazing to play a favourite song just with the voice commands. Spotify App will allow you to play the music by asking Siri to do it for you.

Pandora: Siri with Pandora has made listeners more engaged with this platform. They can play their favourite stations, podcasts, songs, and so on with Siri.

Netflix: An extra edge in the user experience with Siri integration in Netflix. Play your favourite TV shows and movies just by commanding Siri.

The Weather Channels: Check the weather forecast with Siri commands. Ask Siri about today’s weather or for chances of perception.

PhonePe: Similar to Square Cash, you can seamlessly send money to your friend with Siri.

Uber: Interaction with Uber app through Siri is now possible. Just enable location service for Siri, and then book an Uber.

Lyft: Command Siri to open Lyft, and then ask to “book a ride to XYZ location”. This is one of the most amazing uses of Siri.

Google News: Get the most accurate news and daily updates with google news with just a simple command, “Hey Siri, what’s the news?”

What Is The Future Of SiriKit?

Sirikit will also be enabled for Apple’s HomePod where users can access the same services using Siri. Apple’s Siri is about to help you get a whole lot more productive using Siri Shortcuts and Siri Suggestions. When your app gets paired with the Siri Shortcuts app, you’ll be able to set up custom workflows with Siri and trigger those using key phrases.

While Siri Suggestions is a machine learning feature that monitors its user’s activities and provides suggestions accordingly in appropriate situations.

The voice recognition technology is going to change the way we live in the near future. Hence, it is going to be fun to see what AI will do to humans.

Though Apple has revealed the complete recipe for Siri third party app integration, still many of the tech-savvies aren’t aware of it or utilize it for their iPhone and iPad apps. Are you one of them?

Several large apps have already upgraded with Siri integration. When will you? Hire iPhone app developers to get your Siri app integration. Yet need more information? Let’s talk!

Cost of developing a mobile app
A comprehensive guide on the cost of mobile app development. Whether you want to build a hybrid app or native app, this guide will help you know the exact cost.
Download
Related Blogs
Home » How to » How To Integrate Siri Into Third-Party Apps In 2022?