React Native framework started by a Facebook’s hackathon project, built in response to the company’s requirements, is now acquiring the attention of many big brands like Instagram, Airbnb. Considering the huge success of these apps gained in proceeding few years, in 2018 as well, more and more businesses are coming with the vast requirement of react native mobile app development solutions.

The key motive behind introducing React Native was, to bring the potential of React to the native mobile application development process. The difficulty of creating a unique code for diverse platforms was most common among the developers. React Native came as an endowment to solve this problem. Developers can now simply execute the same code everywhere by applying fewer efforts, without having to learn separate programming languages to build the same products.

With this potential, React Native framework is being considered as the best choice for creating hybrid apps, providing the performance of native apps and ease of web app development. The framework will continue to evolve as leading choice for hybrid app development in 2018, due to the several good reasons that we must be familiar with.

Ahead of exploring these reasons lets know,

How Does React Native Work?

When you opt to go for react native app development, the framework builds interfaces semantically as it does on the Web. Actually, designers do not build any interface using the traditional Android or iOS interface elements, rather they utilize logical components like “title”, “screen”, “button”, “list”, and so on.

Following this, you can get a final outcome of your interface. Simply change some lines of your program to set up it for Android, iOS or web. This method is quite fast and convenient.

If you want to modify the app interface for a tablet screen, a phone screen or another one, just use typical structure and change several small elements and it’s done. 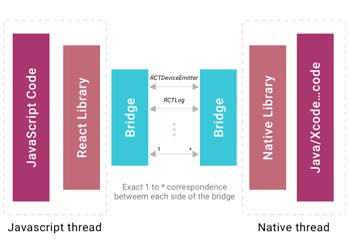 React native framework is exclusively aimed at making a mobile UI. The UI-focused nature of React Native makes it more like a JavaScript library rather than a framework. The UI built with React Native is highly responsive due to the asynchronous JavaScript interactions and the native environment. This also ensures the quicker load time of the app with a smoother experience.

At first, React Native was aimed to support iOS only. But React Native library can now make mobile UIs for both iOS and Android platforms. With React Native Facebook has built its own Ads Manager app with both Android and iOS version.

Here the third party plugin compatibility states that you don’t need to depend on a Web View for some functions. If you want to integrate a Google Maps functionality with your app, then React Native allows you to link the plugin with a native module, thus you are able to integrate the map up with the device’s functions such as rotate, compass, and zoom whilst utilizing less memory and loading quicker.

React Native offers a big relief for business who want to perk up the existing application without revamping it. Without any rewriting, you can simply apply React Native UI components to the present app. if your existing hybrid app was created with Ionic and Cordova then you can easily reuse that Cordova-based code with a plugin.

The building blocks of react native are reusable native components that directly compile to native. Since the components used in Android or iOS have counterparts in React, it will give you a constant look and feel. Due to this component based structure, you can make apps with a web-style and in the more agile way. Apps built with React Native have the look, speed, and functionality of a native application.

React Native is freely available for the app developers across the globe. Without any issues, developers can use its libraries and APIs in their code. One thing that adds to its importance is, it is introduced and maintained by Facebook, and embraced by the huge developer community, enclosing an inclusive authenticated ecosystem for making reliable products.

If you need to switch from one technology to another, then it’s a one-time and easy activity. It will not necessitate developer to entirely revamp their code; rather they are allowed to build components, rewrite and assemble the code effortlessly.

There are wide API interactions in React Native amongst native elements and several modules using third-party developers as well as the opportunity to write your own native modules.

Also, React Native renders native views and not Webview so the problem of browser compatibility is avoided. React Native gives hybrid app developers an opportunity to focus on other app development process by saving time in solving bugs instantly which previously took hours or even days. It gives better performance with native views and due to smooth animations it also gives the feeling of a native platform.

You May Also Like
A Complete Guide on React Native Database

Whenever hybrid app development is the aim, React Native Hybrid App Development framework can’t be ignored. Since the trend of developing hybrid apps is taking a great pace in the app market, hiring React Native developers seems to be more and more in trend.