How Do Free Apps Make Money?

Looking at the current digitization and mobilization trends in businesses, you have decided to build an app and monetize it. You have an app idea. Now what? You are wondering how you will monetize it.

You have tons of questions like should you sell your app idea to the investor by building a prototype? or develop it by hiring a development team and lead your startup ahead for yourself? Whether to go for a free version of an app or a Paid app. Whether to go for iOS or Android. Adopt a subscription model or advertisement model? This or that. Too many questions and confusion. Also, you have many app monetization related queries like;

How do free apps make money?

Should I go for an In-app purchase model or in-app ad model?

How much time it will take before I start earning through my app?

How can free apps make money without advertising?

Is the Freemium model good for app monetization strategy?

In this article, we have curated a list of various monetization strategies and how to implement them to generate massive revenue through an app. We will also discuss famous examples of mobile apps that have garnered millions of dollars through their free apps model.

But before we proceed further and know how to create an app for free and make money, let’s clear out the confusion between free apps vs paid apps.

Free Apps Vs Paid Apps (Which is best for making money) 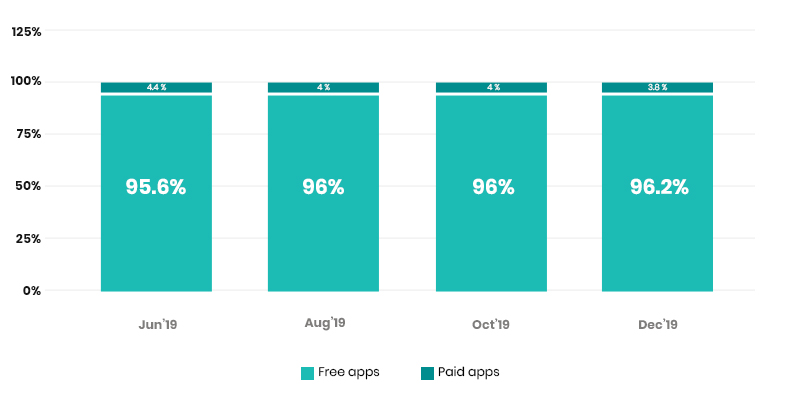 Clients usually ask us about this. And for the most part, once we develop the app, we make them understand both the model. Although the ultimate decision is always upon them.

We recommend paid ads only when their brand has loyal customers. If users have a blind trust in your brand and have been using your service or product for a long time, they wouldn’t think much for paying for downloading the app. Basically, paid ads give you direct revenue generation opportunities. As the number of downloads grows, the revenue will be higher.

Game apps have higher chances of performing fair in the paid version. According to Sensor Tower, in 2018, Minecraft (a block-based game) had generated $ 110 million from the App Store and Play Store, which was highest among any apps. The app charges $ 6.99 for only for the download.

On the other hand, those who are new to the business, those who have yet to establish their brand, we suggest them to go with the free app model. Statista’s December 2019 report claim that in the app store and Playstore about 96.2% of the apps are free. There are only 3.8% of the apps that charge for downloading.

Now if you think that it is paid apps that produce higher revenue, then you are wrong. If you’ll check the top-grossing apps in Google Play and App store, you will realize that it is free apps that racks up major chunk of revenue.

So, let’s checkout and know how to make money off a free app.

How to Make Money with a Free App?

There are multiple ways to monetize your app.

Consumable in-app purchases are done when users need to move ahead in any game app. Users can buy virtual currency or health points to move further to unlock new levels or stages. They can also buy virtual goods, like digital outfits called skins, upgrades and accessories.

If you have a question like how free apps make money without ad, then non-consumable in-app purchase is the ideal example for it. Usually, the user purchases these kinds of purchases for enhancing the app functionalities and get access to additional features. Ad Blocking in the app is also part of this scheme.

Auto-Renewable type of in-app purchases app users can pay for particular services or periodically updated app content. Whereas in the Non-renewing subscription user will pay for the subscription one time and get access to the app content for the specific time.

Advertisements are an innate part of the global market. By allowing to place an ad on a strategic place could be a revenue-generating strategy for your app. With in-ad apps, you allow the advertisers’ product (app or game ) to be displayed on your app. If your app users click that ad or take some action, you get paid. The in-app model lets you make money from a free app

through different advertising models. Which are;

Interstitial ads are the ads that cover the whole interface or the full screen of the users’ mobile or desktop. These ads are designed to appear after specific time frames, usually between natural transition between activities or from one game level to another.

These ads come in the form of text, image, and rich media content. Users can easily pass through or close text or image-based ads by closing it or consuming the ad content. Video ads, on the other hand, can be closed after a few seconds.

Banner ads has been the mainstay of big businesses’ display ad strategy. They are promoted on mobile apps with a specific goal in mind. That’s why they are concise and to the point.

Banner ads are the ads that block out the rectangular part of your mobile screen to the top or bottom. It could be text or static or animated graphics. Unlike interstitial ads, these ads don’t cover the entire screen. So app user can continue their current activity without getting disturbed by ads.

In-app video ads appear on the apps automatically when users are engaging with the app. Normally, Game apps contain these kinds of reward-based video ads in which if the user watches the whole video-he or she gets the extra lives, virtual currency, or additional features.

As opposed to standard static banner ads, Rich media ads are dynamic and adds interactivity to the ad. Users are more likely to engage with such kind of app. In fact, eMarketer article shows that the click-through rate (CTR) of rich media ads is 0.44% which is promising compared to standard ads. These ads are consisted of interactive images, audio, video, text, and more. 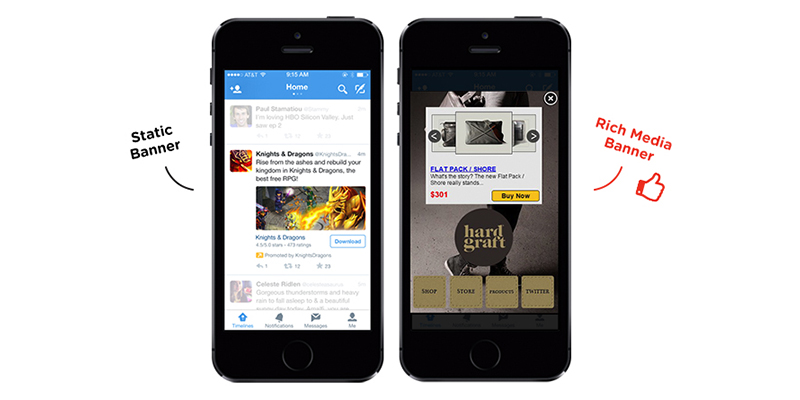 As the name implies, Freemium monetization model is an amalgamation of both “free” and “premium”.

Businesses who want to gain their users’ trust implement this strategy. You can get an enormous amount of users by providing free apps that would later become paid members. It is vital to remember that the vast majority of users won’t pay anything. However, among them there are 0.5 to 2% users who would love to explore new features and want to enhance their experience using the app.

If you build a mobile app that has wider potential users you could go for Freemium model. But if your app targets specific niche then your app model might fall flat.

Remember, if you want to monetize from the freemium model, include only a few useful features for the free version. If you would provide all the premium stuff in the free version your user will not upgrade to the paid ones.

In-app sponsorships are a lucrative way to make money from your free app. If you have already generated enough users for a particular niche, then you could approach a sponsor that belongs to that particular niche. Even sometimes by looking at your app’s success some sponsors could approach you for letting them promote their brand on that app.

In the sponsorship model when your app users interact with the sponsor’s content or ad and take a specific action, you get the pre-decided money. There are two ways you can deal with your sponsor for monetization strategy. One is you both split the share generated from the app and the second is to get the sponsor fee on a monthly basis.

Subway and Marriott are the two brands that have sponsored a mobile app to reach out before their targeted audience. One of the main adversity app developers face while implementing this model is to get the right funder(sponsor) for their app.

Collecting users’ email data through permission could be useful for the future use to the app owner. You can leverage this method and ask your user for providing their email and later use for sending them important messages. You can attract them by offering in-app virtual currency, free features or anything that you want to provide in exchange of email information.

You can integrate Facebook API in your app to get the Email ID. Don’t forget to notify them that in future they would get emails.

After understanding the revenue generation models it is imperative to clear the doubts on Android and iOS. Maybe initially you don’t have that much budget to build your app on both platforms. So obviously you might wonder which must be built first.

After researching the revenue generation of the top 100 apps for the first quarter of 2019, Sensor tower had unveiled the report. In which they had clearly stated that out of total $135 million combined average income produced by top 100 earning app publishers, iOS accounted for 62% ($84.M) while Android garnered only 38% (51M). Which obviously makes iOS a preferred choice for earning from the app.

Apart from that, there are multiple reasons which justify that iOS should be the first choice for monetizing the app. Here are some;

1. iOS users are more likely to Pay for apps than Android users. And it is understandable that if you can afford to buy iOS-powered devices then you are most likely financially sound to purchase $0.99 to $5 (or more) from apps.

2. The mobile app development cost for the iOS apps are 30% less expensive than Android.

The reason is that if one builds the same app for Android and iOS, android takes 38% more coding lines than its counterpart. This increases the app development timeline and ultimately cost.

3. China is one of the most lucrative and promising markets for app publishers. But China had banned google Playstore a few years back. So iOS does not have its competition in the Chinese market. The people over there have strong buying capability in purchasing iOS devices and pay for in-app purchases. Which again suggests iOS would be more beneficial for monetizing the app.

So these five are top mobile app monetization methods through the app. Now it is up to you which app monetization strategy you want to go with. Native apps are becoming more and more prevalent these days. However, it’s up to the advertisers which kind of advertising strategy they would want to implement.

The point is Free apps have higher chances of revenue generation than paid ads. Additionally, free apps get more users than a paid one. We have worked with many such app development startups who came with an idea of the free app and wanted to earn money from it. Also, we have guided many initial startups for deciding monetization models if they had a particular app idea in mind.

Do you have any free app idea in mind? Let’s discuss this. Don’t worry, your idea will be safe with us. We sign NDA (Non-disclosure agreement).

Cost of developing a mobile app
A comprehensive guide on the cost of mobile app development. Whether you want to build a hybrid app or native app, this guide will help you know the exact cost.
Download
Related Blogs
Home » How to » How Do Free Apps Make Money?