Backend Vs Frontend Development: Your Step By Step Guide For 2021

If you are an aspiring a developer or an entrepreneur interested to learn about Backend vs Frontend Programming Languages & Frameworks in 2020 & 2021, you are in the right place. This blog will help you understand what are the basic differences between frontend and backend technologies.

So, keep reading to learn what are their technology stack and why do we need one to build a mobile app, website, or an IoT app development solution.

Above all, a complete solution is achieved by the perfect synergy between the Frontend and Backend Programming Languages & Frameworks.

Stack Overflow did a developer survey for 2020 , in which over 81,000 developers from the world took part. So, here are the 15 most popular programming languages among developers around the world: 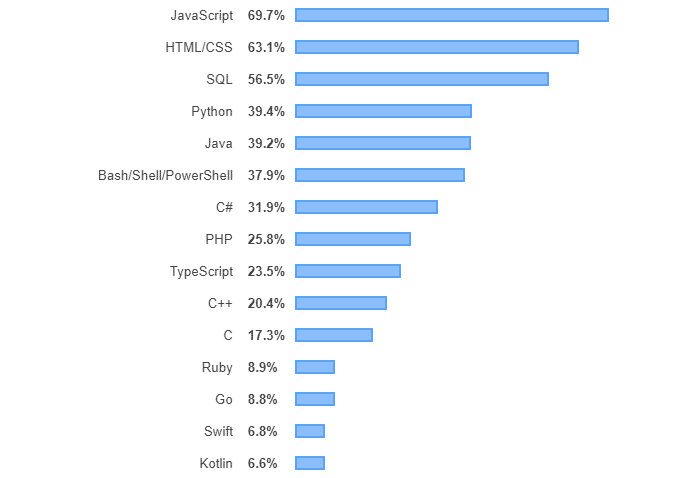 You must be thinking; what are the best Software Developer Skills, Technologies & Languages for 2021, and how do they fit in the Software development scenario?

That’s what you’ll learn in this front end vs back end blog.

So, let’s start from the base and grow our way up to their differences, skills required, development potential, career and salary of frontend and backend developers for 2021.

What is Front End Development?

Frontend, also known as “client-side development” entices of everything that a website or app user can visually see in their app screen or web browser. In simple terms, everything that you can see on the screen of an app or website is the front end.

Let’s consider a live example; the site that you are watching right now. The content design, images, spacing between the paragraphs and lines, the company logo on the top left, and that small notification button in the bottom right corner; all of it is the front end.

Front end for mobile apps is the same as the website. For instance, the content, buttons, images you see in a mobile or web application are part of the frontend. Moreover, the mobile screens are touch-responsive, so when the application responds to all the gestures that you do like pinch zoom in/out, double-tap, swipe, etc. that is frontend in action.

The front end developers build all of these things. They create the look and feel of what you see and touch on the screen.

Ionic, Swift, Kotlin, Bootstrap, Angular, Vue, jQuery, React.js are few of the tools and technologies that are used for Frontend development. We’ll talk more about these technology stacks further in the blog.

Any object connected to the internet is an IoT (Internet of Things) Device. You may be thinking how does a frontend for IoT devices work? Any smart device like a smart fridge, remote PoS systems, smartwatches, smart wallet, needs “something” that users can interact with to operate the device. Hence, that “something” is an interactive medium, and its elements are the frontend for IoT.

IoT devices don’t have a frontend per say, but the devices house a firmware that acts similar to frontend as in a mobile app. Further, this firmware can be written in programming languages like C, C++, Lua, Python, and JavaScript.

There’s UI/UX designing and implementation for IoT devices too.

The most popular frameworks among the 81,000 surveyed developers: 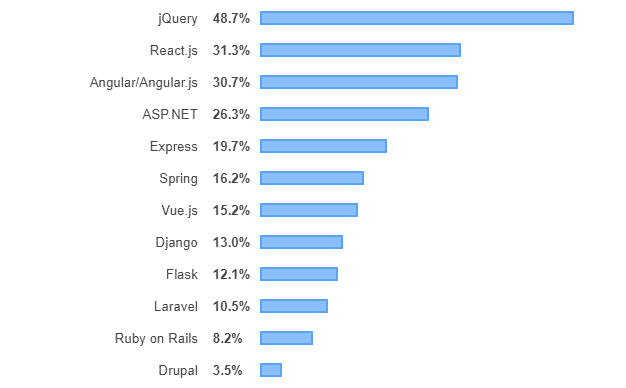 What is Back End Development?

Backend, also known as “server-side development” entices the things that happen in the “back” of the system. Some of the top server-side programming languages include PHP, Node.js, ASP.NET, and more. However, if you are looking to choose the one among them, then you glance through the recent ASP.Net vs PHP comparison and get the right ideas.

Back End of Websites & Mobile Apps

The backend of a website entices setting up servers, storing and retrieving of data, and the interface that connects these servers with the front end. If the front end developers take care of how the website looks, the backend developers are more concerned with the website’s speed, performance, and responsiveness through coding, cloud API & database Integration.

Just like frontend, the mobile app backend development is in every way the same as the website backend. further, The options for you to set up a backend server for your mobile app are: a cloud computing ( AWS, Firebase)  a custom server, or MBaaS (Mobile Backend as a Service).

Ruby, Apache, Nginx, PHP, MySQL, MongoDB are few of the tools and technologies that are used for Backend development. We’ll talk more about these technology stacks further in the blog.

Back End of IoT

One of the most important components of IoT’s backend is the cloud backend. Evidently, Most of the IoT devices depend a lot on cloud servers to upload and download data and process them into actions.

If we talk about advanced IoT solutions, the backend development can be powerful and compatible with capabilities like AI (Artificial Intelligence) and ML (Machine Learning).

Frontend Vs Backend What’s The Difference? 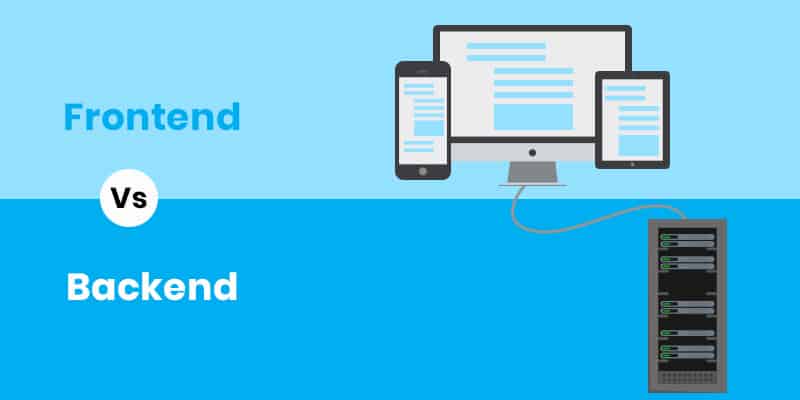 Here are the most in-demand programming languages in the world: 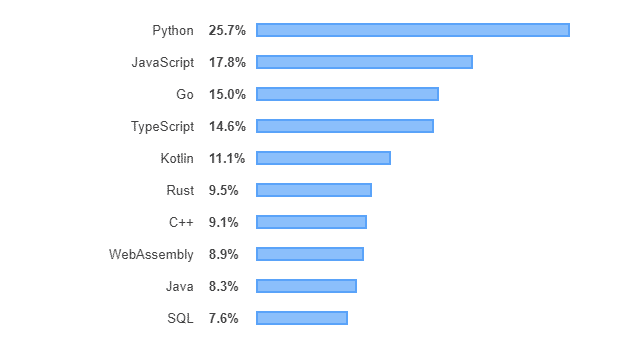 Frontend Vs Backend: Who’s The Best?

Besides the technologies involved, your front end vs back end developer choice depends on what matters to you the most as a developer.

If aesthetics and the feel of the product are essential to you, then your inclination is towards front end technologies as a career and specialty. On the other hand, if you are concerned with the improving efficiency and responsiveness of the website, app, or software, your calling is towards back end development.

A big part of what frontend designers do is to make everything that the user sees on a mobile or PC screen look amazing and also easy to use. On the contrary, the only time back end developers are concerned with aesthetics is when it comes to writing clean code.

If you start to think that in Frontend Vs Backend, any one of the two, is superior to the other based on what we talked above, then it’s a false assumption. The two disciplines are very unique and equally important to build a website or application.

It’s just that some people have a natural talent for the visual aspects, while others are good with the logic and technical problem-solving. Apple became what it is because of Steve Jobs (the front-end visionary) as well as Steve Wozniak (the back-end genius).

Front End Vs Back End Developer

Go through these points to be thoroughly informed about the capabilities of backend and frontend developers.

There are many job opportunities as a developer. Based on your expertise, experience, and field of interest, you can apply for any of the following job positions in the backend or frontend discipline.

The image below represents the percentage of developers out of the 81,000 who believe they fall in below job profiles.

The advanced skills required, change as per the experience and job title, but some skills are absolutely needed to become a front end or back end developer.

What are the roles and responsibilities of frontend and backend developers? Make sure to go through these before applying for a job or hiring your front end or back end developer.

What is a Full Stack Development?

Learning or hiring full stack developer has its own benefits and drawbacks. The number of developers reduces to half, but the level of expertise also reduces. The developer specialized in either frontend or backend development will always know more about the single discipline than the one who knows both.

There are various other stacks similar to full-stack like MEAN Stack, LAMP Stack, .NET Stack, Python-Django Stack, ROR Stack, etc. A developer can become an expert in any of these technology stacks.

Frontend or Backend: What Will You Choose for 2021?

If you are a developer, don’t choose your specialty based on what sounds cooler. Do a more detailed analysis and then choose the expertise that interests you the most.

If you are looking to hire app developers or the best frontend and backend developers to build your website, app, or software; get in contact with our tech experts. Talk to us and bring your search to a satisfactory end.

Cost of developing a mobile app
A comprehensive guide on the cost of mobile app development. Whether you want to build a hybrid app or native app, this guide will help you know the exact cost.
Download
Related Blogs
Home » Dev & Design » Backend Vs Frontend Development: Your Step By Step Guide For 2021