Kotlin vs Java: Will the Emerging Player Beat the Veteran?

Will Kotlin bring a revolutionary change in android app development?

Businesses planning to develop an android app face many challenges. Especially, in terms of selecting which technology to use for developing the best android app.

People with technical knowledge have the confusion of Kotlin vs Java. Those who are unaware of both the words; Kotlin and Java are two programming languages for Android app development.

Ever since Google has introduced Kotlin as their second official programming language for the Android app development, the battle of Java vs Kotlin has become more fierce!

In addition, top companies like Pinterest, Evernote, Uber, Trello, Postmates, Corda, and many more have converted their Android apps from java to Kotlin. This, in turn, has generated curiosity among developers.

Are you curious to know which language for android app development will help you garner the best android app performance?

Don’t worry! By the end of the article, you will come to know which one is better: Kotlin or java?

How does Kotlin compare to Java?

Is it better to learn Java and Kotlin both?

Should I learn Kotlin before Java for Android development?

Should I convert Java to Kotlin?

Is it a good idea to go back and covert Kotlin to Java?

And some of the most asked question on Google such as;

Applications on the Android operating system(OS) are mostly written in what programming language?

In what languages are Android apps written?

In simple terms, Kotlin can build an application in a better way that can run on Java with lower headaches. Kotlin is a programming language that facilitates developers to build apps within less time by making a great app.

Kotlin is an statically typed object-oriented programming language developed by JetBrains. It comes with interoperability with Java, conciseness, and Android studio support.

I have heard someone described Kotlin as a “Java light”.

Most probably, because of Kotlin‘s resemblance with Java.

In fact, Kotlin utilizes java machine in your device to run a finished app with less frustration. It requires Java to be installed on your computer or phone or whatever the devices. Even you can use Java and Kotlin simultaneously in an application.

Enough of introduction, now let’s move on to what differs Kotlin with Java?

Where Kotlin is better than Java?

Developers have mixed opinion about Kotlin vs Java.

But here are some point where they agree on why use Kotlin than Java.

Declaring a data types can be cumbersome and tedious but here Kotlin gives you a solution in the form of aggressive type inference.

It can tell developers which kind of data a function is using by looking the rest of the code and how it is being utilized. It prevents developers from unnecessarily declaring the type of expression and values in their code.

We all know how it takes years to get mastery over Java and its syntax. On the Contrary, it’s not in the case of Kotlin. Kotlin’s syntax is not as complex as Java.

Writing code in Kotlin is simple than Java. It uses the best idea from the programming languages that existed before.

Ultimately, reading and understanding the code is simple and debugging takes less time.

Developers easily can define objects and functions in a single place. It will make a lot easier to read and debug the code.

In the end, the code written in Kotlin is friendly, faster and easier than Java. 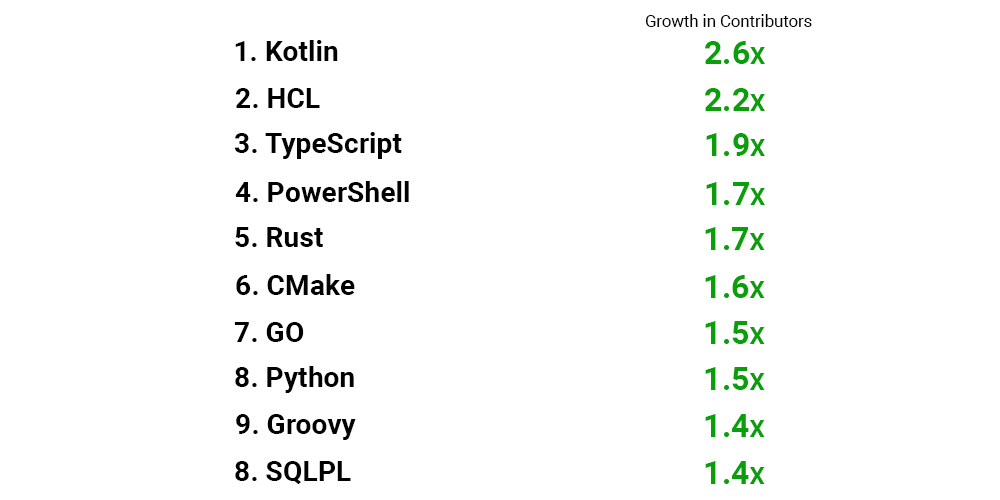 Now that you have come to know what is Kotlin, let us differentiate Kotlin and Java in terms of functionality.

A survey conducted in 2018 shows that 100,000 stack overflow users found over 7.54% of respondents use Kotlin for android development.

Check out where is Kotlin now

Whereas Java’s popularity still is at a peak. TIOBE Index for Java is the latest proof of Java being the most popular android programming language in March 2020.

When it comes to Java, Android doesn’t support a full range of java functionaries. Though, android support Java 7 wholly, it support a subset of Java 8 features.

Whereas, Kotlin Proves to be effective when it comes to android studio support. So in terms of supporting a full range of capability, you can undoubtedly Plunge with Kotlin. If you are planning to build multiple apps in the future, Kotlin is a perfect choice.

While you are using Java you can assign “Null’ to any variable. It comes in the form of a challenge when you utilize object reference with null values because you get a “NullPointerException”.

Here in Kotlin, it comes as one of the biggest advantages. In Kotlin, No “type” can have null by default. If developers want to hold null in “nullable“ variable, it has to be explicitly defined. Which eliminates “NullPointerException”

Java lets multi-threading in the background but it’s complex. A thread involving a long-running I/O or CPU-intensive operations.

Whereas in the Kotlin, a developer can run multiple threads. It supports coroutines. These things nullify the execution at a certain level without blocking any thread.

Kotlin was one of the most popular and lucrative skills at the end of 2018. the average salary of the Kotlin developers is around $140 per annum.

As the demand for the Android app development is growing, the need for the proficient Kotlin developers is also enhancing. Hence, you should make yourself ready to prepare for a longer time and higher manpower.

In comparison, hiring cost for the Java developers are affordable then Kotlin. Because there are enough developers you can bargain with according to your project requirements.

If your goal is to create a more complex product at a larger scale, Java is still a better choice and features of Java support it because Java is more mature than Kotlin.

On the other hand, only android development is the main objective, then you should definitely head for Kotlin due to its productivity advantage and support of Google.

JetBrains have claimed Kotlin performance is best than Java because of its speed. Kotlin has support for inline functions that let a code using lambdas to run even faster than the same code written in Java.

Where is Java Still Leading?

Kotlin maybe new, and instantly became eye-candy of the developers but Java still has some advantage over Kotlin apart from its maturity. And still many developers prefer Java for Android development.

These things are not available in Kotlin

Making a decision for choosing the best programming language can be a tricky job. Java and Kotlin both have their strong points. Hence, to decide the right one for you will require to consider a long term strategic aspects of both platforms.

You can’t overlook the fact that Google itself is moving away from Java. But on the other hand, Java has been with developers for a long time as a friend.

Both can coexist with each other in one project because of their resemblance of the structure.

Are you confused to start developing android apps and can’t decide on Kotlin vs Java?

Are you double-minded on taking a decision whether to hire Kotlin developer or hire a Java developer?

Contact us to have a helping hand into deciding best for your app development.

Cost of developing a mobile app
A comprehensive guide on the cost of mobile app development. Whether you want to build a hybrid app or native app, this guide will help you know the exact cost.
Download
Related Blogs
Home » Dev & Design » Kotlin vs Java: Will the Emerging Player Beat the Veteran?